Thanksgiving is the perfect day when excess and sentiment join together. 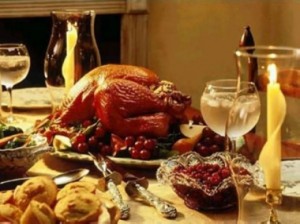 It isn’t religious, it isn’t political, just the perfect excuse for a great meal with family and friends followed by an afternoon of football.

Thanksgiving Day, November 28, 2013 will be the 150th anniversary of President Abraham Lincoln’s Proclamation decreeing that the 4th Thursday of November each year be set aside as a day of giving thanks.

So how did it all begin and where did all those traditions get started?

We all know the settlers crossed the ocean in the Mayflower, landed on Plymouth Rock and had a pretty devastating winter.  Half of the crew and passengers died during the winter of 1620 and one was born.  When the weather improved, they left the ship to explore and set up the village.  Did you know that an Abenaki Indian that met them spoke English?

Yep, according to History.com, this native Indian returned a few days later with another Native American, Squanto, a member of the Pawtuxet tribe who had been kidnapped by an English sea captain and sold into slavery before escaping to London and returning to his homeland on an exploratory expedition*

Squanto taught the Pilgrims how to cultivate corn, extract sap from maple trees, catch fish in the rivers and avoid poisonous plants.  He also helped the settlers forge an alliance with the Wampanoag tribe which would endure for more than 50 years.

To the relief of everyone, that first harvest was very successful, and the Pilgrims knew they would be able to survive the winter.  Fall festivals date back for centuries.  After all it is a time of the year when the most food is available, and there is much to celebrate.

The Pilgrims invited their benefactors from the Wampanoag tribe to a three day festival of feasting, games, and even drinking liquor.  The Native Americans provided 5 deer, and the settlers set out on a “fowling” mission.  Did they come back with Turkey?  Probably not, most likely goose, lobster, and codfish joined the venison as the main courses.  How about pumpkin pie?  Probably not, however they did probably serve a form of pumpkin – squash stuffed with wild garlic or fruit and nuts and placed on the coals to cook until soft.

For the next 150 years festivals of giving thanks would be observed sporadically on a local level.  In 1623, the Pilgrims at Plymouth Plantation, Massachusetts, held another day of Thanksgiving. As a drought was destroying their crops, colonists prayed and fasted for relief; the rains came a few days later. Not long after, Captain Miles Standish arrived with staples and news that a Dutch supply ship was on its way. Because of all this good fortune, colonists held a day of Thanksgiving and prayer on June 30th.

In 1777 Continental Congress decreed that all colonies would celebrate a national day of Thanksgiving to celebrate their victory over the English at Saratoga, and in 1789 President George Washington announced the first national Thanksgiving Holiday to be held on Nov 26th.

So where exactly did the pumpkin pie, dressing and potatoes tradition begin?

Well, In 1827 magazine Editor Sara Josepha Hale, author of the nursery rhyme “Mary Had A Little Lamb”, started a 30 year letter writing campaign to establish a National Day of Thanksgiving.  She also published recipes for pumpkin pie, stuffing and turkey that would become the staples of modern day Thanksgiving meals.

Sara’s efforts were successful and in 1863 in the midst of the civil war, she convinced President Abraham Lincoln that a national holiday of thanks would help bring the nation together.  President Lincoln declared the last Thursday of November to be a national holiday – Thanksgiving

So how did the Football tradition begin?

Well, in the high school and college arena, early games of cricket evolved into the American sport known as football.  Football on thanksgiving is as old as the sport itself.   According to Wikipedia, the first Thanksgiving Day football game took place in Philadelphia in 1869.  It would become an institutionalized fixture of organized football in 1882 when the Intercollegiate Football Association held an Annual Collegiate Championship game in New York city on Thanksgiving Day.  Today these college games are usually among school rivalries and encompass the entire holiday period – Thursday, Friday and Saturday.

Commerce was the motivating force for the entry of Pro Football to the holiday tradition.  In 1934, desperate to bring attention to the new team and its star quarterback Dutch Clark, the Detroit Lions owner devised the idea of a Thanksgiving Day Game.  In 1966 Tex Schramm, the Dallas Cowboys owner, jumped at the chance to host a second Thanksgiving Day NFL game.  Not to be outdone, in 1967 the AFL added a second Thanksgiving game.  Now there are three football games on Thanksgiving Day – one in Detroit, one in Dallas and the NFL networks game in the evening –  long after the dishes have been done and the remains of the holiday meal have been put away.

Parades –  who had that bright idea?

The balloon became the star of the parade which ended with Santa’s arrival in town. Tony Sarg, a children’s book illustrator and puppeteer, designed the first giant hot air balloons for the parade in 1927 and later created the elaborate mechanically animated window displays that grace the façade of the New York store from Thanksgiving to Christmas.

Thanksgiving Day kicked off the Christmas Shopping season – crucial to American business.  It was so important to commerce that In 1939 Franklin D Roosevelt moved Thanksgiving up a week to give depression era retailers additional time to make more money during the Christmas shopping season.  There was a public outcry and in 1941 congress returned the Holiday to the 4th Thursday of November.  Black Friday and cyber Monday have become forecasters of how the holiday shopping season will fare for retailers..

What is the Quirkiest tradition?

President George H. W. Bush pardons several turkeys in 1989 and sends them to a life on the farm instead of the dinner table. Each succeeding president since then has pardoned several turkeys each year.

So let’s talk Turkey – how did that become the main course?

In true English custom the colonist wanted a status main dish for a day of celebration – fowl or game.  Game was readily available so that was out.  They wanted something more exotic and harder to come by –  the majestic wild turkey fit perfectly!  Today most turkey served on Thanksgiving Day are domesticated, solid white, majestic birds grown by commercial growers.  Minnesota leads the nation in turkey production – raising an estimated 46 million turkeys in 2012 according to the USDA National Agricultural Statistics Service.

So there you have it – Thanksgiving Day, an American tradition past and present.  A holiday deeply rooted in history, courage, faith, and hard work, celebrated with good food, games and love of family and friends.  Just as it was meant to be – Happy Thanksgiving!