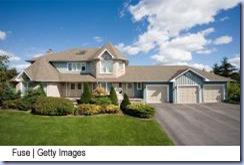 After five years of downsizing, homeowners may be “upsizing” once again. A growing family and a need for more living space are the prime reasons across the generations, according to a new survey by national homebuilder PulteGroup.

“There appears to be a renewed sense of optimism in housing. Homebuyers, regardless of their stage of life, still want and need larger homes,” said Pulte’s chief marketing officer Deborah Meyer in a release. “Consistent with our consumer research, the survey results show that today’s buyers are equally focused on more efficient use of the spaces within their homes.”

Eighty-four percent of homeowners ages 18-59 surveyed by Pulte said they did not have plans to downsize, which was particularly surprising, given that Baby Boomers have been expected to downsize en masse; many have been unwilling or unable to sell their large homes, however, due to the huge drop in home prices over the past five years.

The average size of a newly built home increased 3.7 percent in 2011 from 2010, according to the U.S. Census Bureau. That was the first annual increase since 2007 and indicates that home builders are seeing demand for larger spaces. The demand, however, is not where it used to be. Home buyers are less willing to head out to the so-called “ex-urbs” to get their larger space,” according to the latest findings from the American Institute of Architects. (Read More: Best US Housing Markets for Buyers and Sellers)

“In many areas, we are seeing more interest in urban infill locations than in remote exurbs, which is having a pronounced shift in neighborhood design elements,” said AIA Chief Economist, Kermit Baker. “And regardless of city or suburban dwellers, people are asking more from their communities in terms of access to public transit, walkable areas and close proximity to job centers, retail options and open space.”

Half of residential architecture firms highlight demand for multi-generational housing, up from 44 percent in 2011. Fifty-nine percent said access to public transportation is key, up from 47 percent a year ago. (Read More: New Nightmare for Home Builders: Not Enough Skilled Workers)

More homeowners are also upsizing what they have, with 58 percent of architects reporting improvement in additions and alterations, up from just 35 percent a year ago; kitchen and bath, as usual, top the must-have list.

CNBC’s Diana Olick reports 84 percent of those surveyed by Pulte Homes say they want to either stay in the same sized home, or upsize their next home.

During the last housing boom, extravagance drove new construction and remodeling. Now, the trends are more practical, with energy efficiency and the need to accommodate growing families driving the gains. Home owners are also looking to builders to help them use the space they have more efficiently, especially Baby Boomers.

“They have a lot of desires for the home, and we’re hearing this group say they want functionality and smartly-designed homes without wasted space,” said Meyer, who adds that this doesn’t necessarily translate into smaller homes.

While these findings bode well for the home builders, they may also add optimism to the upper end of the market, and all those so-called “McMansions”—generally considered in the 3,000 to 5,000 sq ft range—many of which lost significant value during the housing crash. (Read More: Pending Home Sales Surge to Five Year High)